Crash. Bang. Wallop. Hashim Amla smacks the ball over the boundary for a 6. The crowd roar. We jump and dance, throw confetti and wave signs. Cheerleaders gyrate around the ground. I’ve made some new friends and together we celebrate these batting heroics, this “rampage” as the bright video screens inform us. We settle down and wait for the next ball, eager for another explosion. Amla goes again, carving the ball high into the air. Only this time the ball falls short. Into the grateful hands of the fielding side. Out. The crowd roar. They jump and dance, throw confetti and wave signs. Cheerleaders gyrate once more. No matter that now the home side ebb where before they flowed. We celebrate the explosion, the action. This is Twenty20 cricket in India, the IPL (Indian Premier League) and it is brash, loud and immensely proud of it. Teams are assembled for millions, plucked from all corners, dressed in bright colours and set to do battle for our entertainment. Its curious to be at a ground where fans cheer both teams almost equally, but I guess that is why they are here. Not for their team, hard to feel attached to a constructed franchise, but to be entertained. 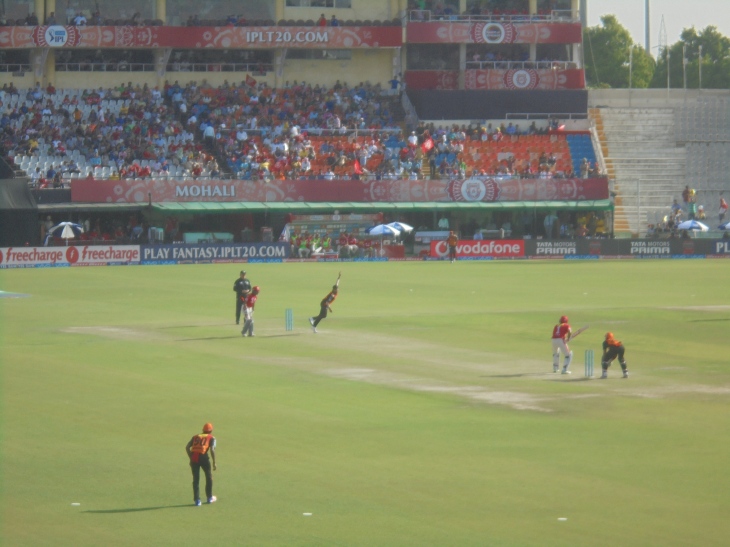 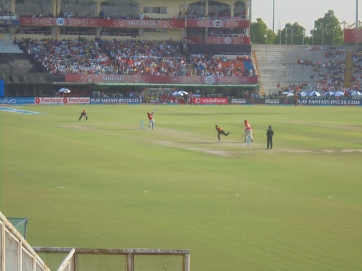 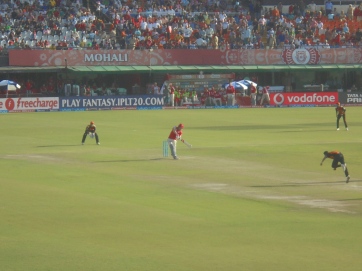 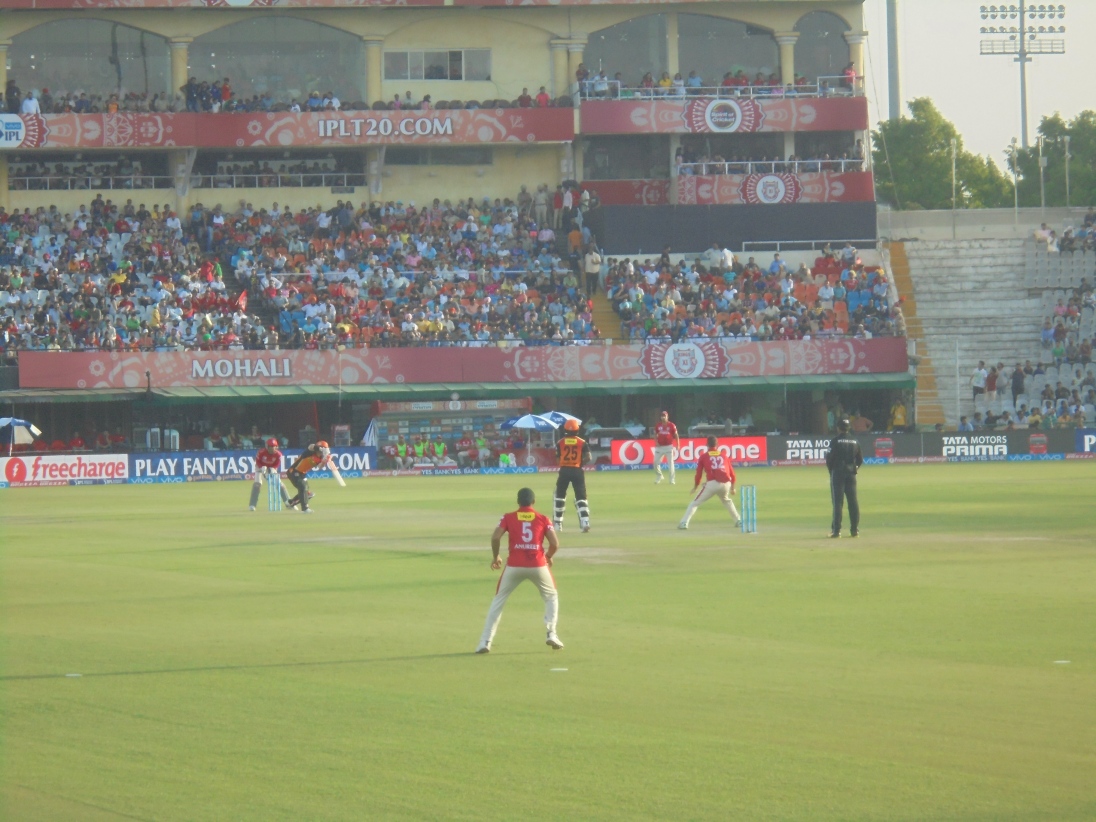 The home side, Kings XI Punjab, lost in the final over, to Sunrisers Hyderbad. So I was certainly entertained. But it was also a little perplexing. Wickets and runs from both sides were cheered, heroes on both sides adored. The only real spontaneous name chanting was for David Warner, the destructive Australian Batsman on the away team. He took the whoops and cheers with a nod and a wave, a bit bashful. Embarrassed perhaps, that the home fans favoured him over one of their own stars. Over their own team even. In fact It was very much about the stars rather than the teams. We weren’t here to see these two made up sides, but to see Warner and Amla swing their bats. Miller and Yuvraj Singh lay waste to the bowler. Who cares what the overall score was, how many runs did he get, how fast did he get them? Which bowler got the most wickets, who did he get out? Cricket, and the shortened format Twenty20 especially seem to lend itself to that. Individuals bowl, bat and catch. It lends itself to the creation of standout individuals: their contribution quantifiable, their worth valuable, their services hireable. The IPL is the pinnacle of this idea. It’s a funny mixture of an odd English game and a hyper-commercialised American entertainment sport. Its got colour, its got razzmatazz, and its oh so incredibly Indian. Its bright, brash and vivid for all of its existence, one massive party. Oh, and there were people taking selfies everywhere. 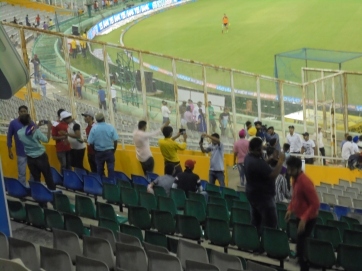 The selfie is obviously a modern phenomenon. But it is also a global one. East, west, north, south, everyone is holding their camera phones at arm’s length and taking a picture back at themselves. In India though it seemed to e to reach new heights. On the streets, at the mall, in pars and at sacred monuments: nowhere is safe. Do they really like themselves? Are they desperate for attention? Certainly they get uploaded exhibited on social media to be liked or favourited or shared. Bu where does that lead, what is the point of it all? Are we now so obsessed by ourselves that we just want to flood the world with our image, and the Indians more so? Why go to the cricket or the monument at all if it is really all about you? It’s a strange phenomenon, a curio of modern life with no end product.

However, perhaps we are weaving something. Creating a story, an identity, a hyper-individual of ourselves. Want to know about me? Here it is: freely available online to view, complete with a tally of likes and shares and comments to help you gauge my life’s performance. Putting statistics to the individual. Quantifying our contribution.

Selfies are like this, this Mid-Atlantic-Indian cricket is like this, and other sports are like this. We’re recording, judging and rating everything. Prizes for the winners. At the basketball there was a car on the court: Best social media post with the corporate hastag and YOU WIN THE CAR like like like Bazinga! How very American. At the bull fight too everyone was dressed up to the nines, and putting and preening in front of their own small screen while massive bulls died below. Are these the modern times?

I don’t know who won it, but I hope they’re happy

Man taking selfie upper left. Nothing else to see

This movement felt particularly strong at the IPL game of all the sport I’ve seen probably because its cricket, which lends itself to individual performances, and because it was India, where they seem obsessed by the cult of the individual. And yet the funny thing was I had some lovely personal moments with other fans while at the cricket. I met tons of people, shook hands or high-fived umpteen times. Danced with scores at every 6, cheered along to the music with every four. It may have been very temporary, but for that match (and about half an hour afterwards) I made so many friends. Face painted, grinning, shouting, waving friends. Yes, they all wanted to take a selfie with me. But I’m certain they would’ve approached me without their phones. I hung out with some policemen, some telecoms employees on a corporate gig, but mainly I got on with the other denizens of the North stand. It was wonderful. I beamed all the rest of the night and the next day. I too took a few selfies with these exuberant fans. But what I’m taking home is the warm glow from being with a group having a great time We had a lovely day out at the cricket.

2 thoughts on “One went to the cricket”