The press, essential part of the science machine or irritating nuisance?

I also made a little “tweetable abstract” to help spread the good word (H/T George Swan for the idea for this). I then contacted the University of Exeter’s press office, we knocked up a press release, then sat back to see if anyone would be interested.

But why am I telling you this? Well the reason is that some media outlets reported it quite accurately:

Yep, mock them all you like, but the Daily Fail online actually did a reasonable job.  They even had a little box on cricket mating behaviour. The pictures were of the wrong species, but you can’t have everything.

For some reason, a couple of Indian papers also carried it: 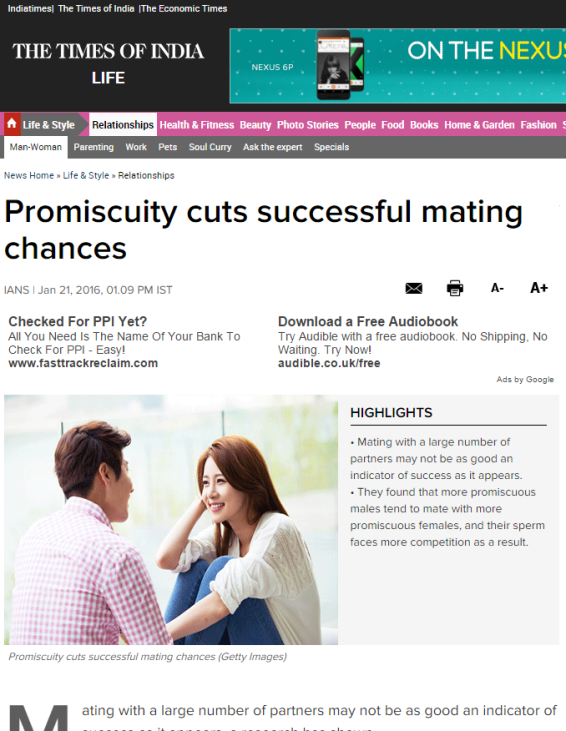 Last time I checked the Times of India had changed their headline to “Immorality cuts…”, which shows their angle on the whole thing. They largely quoted the press release, although like the Mail their headline is a little misleading as we did not actually show that promiscuous males do worse, just that the patterns of sperm competition we found may reduce the successfulness of promiscuity. But no biggie.

However, there was one “science” journalist out there clearly with an axe to grind:

Amusingly, the West Briton then got in on the act, but instead claimed that we found that promiscuity reduces male fertility:

I guess that is slightly more reasonable, we did say that promiscuous males may have lower paternity rates, but its nothing to do with their fertility. Indeed there may be a negative relationship between success in gaining matings and ability in sperm competition, but there could also be a positive relationship. Perhaps we’ll look into this in the crickets. But we won’t tell the Western Daily Press if we do…